In My Own Words with Claire Soria

Join us for a live virtual conversation with Claire Soria! 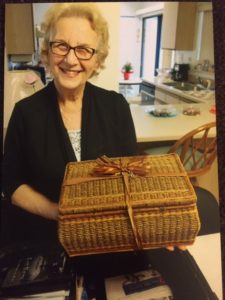 The sound Claire Soria remembers vividly, from the Nazi invasion of Brussels, is hearing the tanks going down her street.  She recalls the armed soldiers marching into every government building to take down their precious Belgian flags and replacing them with flags with the swastika.

Soon after, Jewish children of every age were forbidden to go to school.  Every Jewish family was told to sew a yellow star on their clothes.  Restrictions such as walking on sidewalks, shopping after a dark, or participating in any kind of activity were violations of the law and punishable.  People living in Brussels were told to report anyone they knew to the authorities or they would be punished as well.

Claire’s father was a tailor and self-employed.  He worked until he was arrested and deported to Auschwitz.  He had gone to deliver important papers to a client who was trying to leave the country.  Sadly, her father was tortured and killed in Auschwitz.  He had taken part in the Belgium underground until his arrest.  He received a post-mortem award from the kingdom of Belgium after the war.

Claire’s mother, on the other hand, asked their neighbor if they would be willing to hide Claire in their apartment while she went into hiding with an aunt and uncle— only to be discovered by the gestapo and deported to Auschwitz. The wonderful Christian couple, Lea and Lambert Sabaux had been musicians and although Claire was forbidden to get an education, they took the time to teach her how to play the piano, something she enjoys to this day.

The Sabauxes cherished Claire and raised her as their own.  After the war, the law required Claire to live with her Aunt who would not allow her to see the “grandma and grandpa” she loved. Her aunt sent her away to summer camp to spend time with children her age, and then, at age 13, to the U.S. She didn’t speak English and was several years behind in school. Claire recalls those as some of her darkest days.

Claire eventually married and had three children. She has six grandkids and two great-grandchildren.  Grandma’s piano lessons paid off. Claire followed in her footsteps and became a piano teacher.

Hear Claire share her story live and she will take your questions.

Virtual Event
Event Categories
Community Program
In My Own Words